What to do today on my day off before Joey gets here? Well after a few minutes on Stumble, I had my answer.

I found this recipe online and began drooling just looking at the pictures! Within fifteen minutes I was at the grocery store on Arthur Ave stocking up on all the necessities.

I did pretty much exactly what the recipe called for except I used Half and Half double stuff Oreos instead of regular single stuff, and I used a round pan instead of square because that’s all I could find in the kitchen.

Second layer of brownie mix...and into the oven! 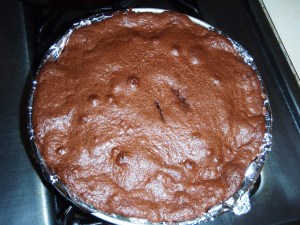 As much as I wanted to just dig in right then, I waited twenty minutes for the brownies to cool and I was handsomely rewarded!

Add a tall glass of milk and I was a happy camper.

A few minutes later, one of the girls came downstairs. She said she knew I was baking because my door was open and it smelled like cookies in the house! She gave the brownies two thumbs up as well 🙂 After I went back upstairs one of the guys poked his head in to say “Meredith! It smells so good!” Good thing I made a big pan of them, some for everyone! I highly recommend trying the recipe…it was super easy to make and delicious!!!